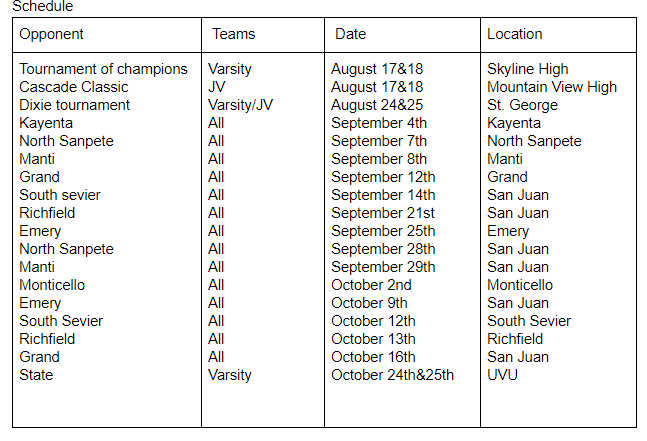 San Juan at Tournament of Champions

Tournament of Champions- Our San Juan High head Coach Kelli Keyes and assistant coach Mel Holliday took our varsity girls to skyline high on August 17-18 and played the first tournament this season coming out of the first day with 5 wins and 0 losses playing Hillcrest, Wasatch Wasps, Skyline, Logan and Rowland Hall. Unfortunately the second day they only had one win against enterprise and lost to pleasant grove and Skyview. They ended the tournament with 3rd place!

​Dixie Tournament-  Our San Juan High School Volleyball team went to St. George on august 24th and 25th. Varsity won all of their games on the 24th playing cedar, Inter Mountain Christian and Manilla. On the 25th they played Canyon View, Orem, Rich field, Olympus, Emery and Corner Canyon. They won all of those games except for Corner Canyon. Over all our girls had a strong defense and offence. Each one of the girls learned so much throughout this tournament and really adjusted their playing. This tournament was important for the girls off court. They had the most bonding time to get to know one another and it really showed on the court! They came out of the tournament with 2nd place!

Our SJH volleyball girls played in Kayenta on Tuesday night. The girls played a really good game, playing five sets but sadly taking a loss. The first set they fought their way to the top and won it, second and third set didn’t go very well and they ended up losing them. Fourth set was a good, exciting game and the broncos won 25 to 11! The fifth set began and they started out with a good start, but they ended up losing 13 to 15. During the games our defense was struggling getting the blocks up. Kayenta had some fierce blockers that we could not pick up the first while. They learned that a big issue we had being blocked was our timing. Our sets and hitters were not timing well together and figured out it was the timing so they learned from that. They adjusted their defense and got up some of their blocks but still struggled. Our girls learned a lot and they now know what needs to be adjusted. They are very excited to play their next game and see how their defense plays.

North Sanpete- Our girls played north Sanpete on September 7th. They were very excited to play the team that placed second in state last year. They played strong and had a great defense and offence. Our girls won the first set against North Sanpete with a score of 25 to 16. North Sanpete won the next three sets. The score for the second set was 20 to 25, The next was 19 to 25, the last set was 25 to 27. All of these games were very close but North Sanpete came out with a win.

Grand- Before our girls went into this game they started off with a disadvantage because, Sophomore player Jerika Torgerson almost had to sit out the game from dislocating her pinky in the earlier JV game. This player stayed strong and still played and pushed through it with her team at her side. Our varsity girls beat Grand in a total of three sets.

Rich Field- Our girls played Rich field for homecoming week. They started the night with a very emotional turn retiring old player Krista Grover's Jersey number 24 who passed away on March 27, 2018. With San Juan High former head coach Cassy Moon sharing a few words of Krista's memory. Krista played a major role in San Juan volleyball and the community. We are all very pleased to of had her part of San Juan high volleyball. They then started the night winning the first and second set against Rich Field. They lost the third and fourth set. Our girls finished the night winning the fifth set with a final score of 15-4! This will be a night to never forget.

I asked the head coach of volleyball a couple of questions about this season.
What is different from last year's team and this year’s team? "This year’s team is different from last year’s in that they are able to stay positive and motivated very well. They don't let each other get frustrated or down and try to quickly move on from the mistakes.”
How do you think you guys are gonna do this year?“Obviously I think we are going to do extremely well. I don’t want to jinx us by saying anything because i'm pretty superstitious. However, this group of girls are extremely talented and have the motivation and desire to go as far as they want. I hope that results in state championship game.”