Girls Basketball Game @Fruita Tournament (Varsity)
SJH girls basketball team left at 10:30am. to attend Fruita Tournament on Dec. 6, 2018. Their first game was against Grand Junction at 5:30, final score was 35-37 Grand Junction with the win. For the first quarter girls were ahead by one point, by half time they were behind two points. Third quarter San Juan was ahead, then fourth they were down 2 points. Next game was at 7:30pm against Fruita Monument (Wildcats). Fruita Monument won against San Juan 55-46. For this game scores weren’t uploaded into websites we needed it from, but (Sr) Bodell Nielson scored 15 points, tied with Bodell was (Junior) Delaney Palmer. (Junior) Madi Palmer scored 8 points, following Madi was Brittany Grover, Sadie Brown and Katie Giddings with 2 points. As a team they keeping it together, and looking to one another for support. The last game for SJH was against Grand Junction Central (Warriors). Broncos won against the Warriors, final score was 56-44. Broncos came ahead first quarter 19-14. By second quarter SJH scored 14 points and Warriors scored 13. Guessing that Broncos got some great energy for this game, they had the fire they needed at the beginning. Continuing into 3rd and 4th quarter Broncos scored more points each quarter, giving them the lead. By the end final score 56-44, Broncos with the W. Good job ladies! 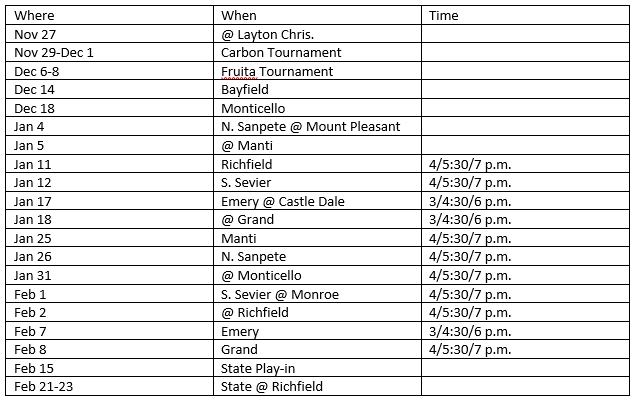 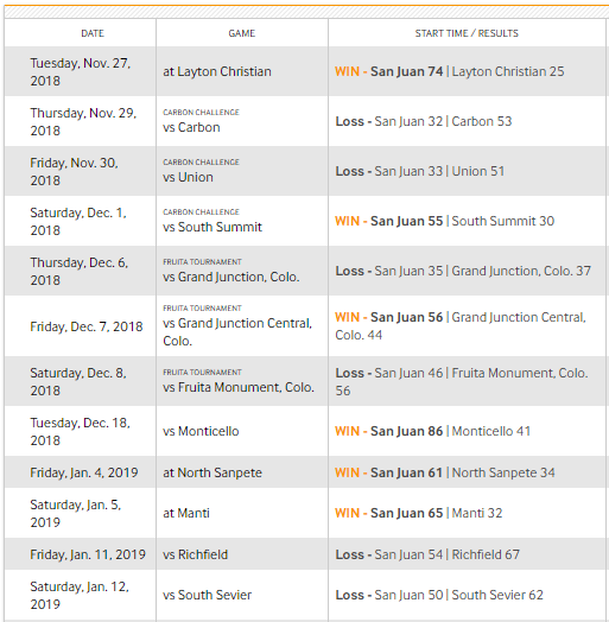 On Friday January 11th San Juan girls basketball played the Richfield wildcats. The Broncos got off to a rough start and the first quarter ended Richfield up 21-9. But the Broncos kicked it into gear and out scored the wildcats in the second quarter. The Broncos had almost bridged the wide gap and ended the half down only 25-29. The third quarter found the Broncos still hanging on 37-42. The lady Wildcats out scored the Broncos in the 4th quarter and ended with the region win 67-54. The Broncos leading scorers were Delaney Palmer with 16 and Bodell Neilson with 14. Tasiah Little, Syannah Ketchum and Madi Palmer each chipped in with 7 points of their own.

Saturday the 12th’s game was a lot like the night before. Playing against the South Sevier Rams, the Broncos looked to get a much needed region win. Getting off to a rough start the Broncos trailed 11-20 at the end of the first quarter.  The Broncos outscored the Rams in the second quarter ending the half behind but closing the gap, 24-31. Despite their hard efforts the Broncos lost that region game 50-62. Delaney Palmer was the night’s leading scorer with 20 points. Bodell Neilson added 12 and Madi Palmer had 10.

January 17th the San Juan Broncos went to Emery High to play the Spartans. They lost and drove home in the snow.

After some scheduling mix ups the Broncos finally got the chance to play the Grand Red Devils on Tuesday January 22nd.

On Friday the 25th The San Juan Broncos played the Manti Templars in San Juan. Our Broncos beat Manti by a lot when we played them in Manti and Manti came to San Juan and did not want to lose again. They put up a fight the whole game but San Juan still came out on top with a final score of 77-36. Saturday the 26th North Sanpete played our Broncos at home and put up a pretty good fight for losing to Grand County just the day before. Our Broncos beat North Sanpete ending the game with the score: 50-34. Delaney Palmer and Tasiah Little leading the team with 12 points each and Madi Palmer right behind them with 11 points. Our Broncos will take on the Richfield Wildcats and the South Sevier Rams febuary 1st and 2nd.

The Broncos geared up for a long weekend by playing the Monticello Buckaroos on the last day of January. The game started off a little rough with the score at the end of the first quarter Broncos up 14-11.  The buckaroos played good and hung with us as the half ended 23-17 favoring the Broncos. San Juan came out strong in the third quarter scoring 20 points to the Bucks 12. Overall, it was a dog fight of a game but the Broncos came out on top with the ending score 53-41. Delaney Palmer was the night’s leading scorer with 16 points, followed by Madi Palmer with 13.
​