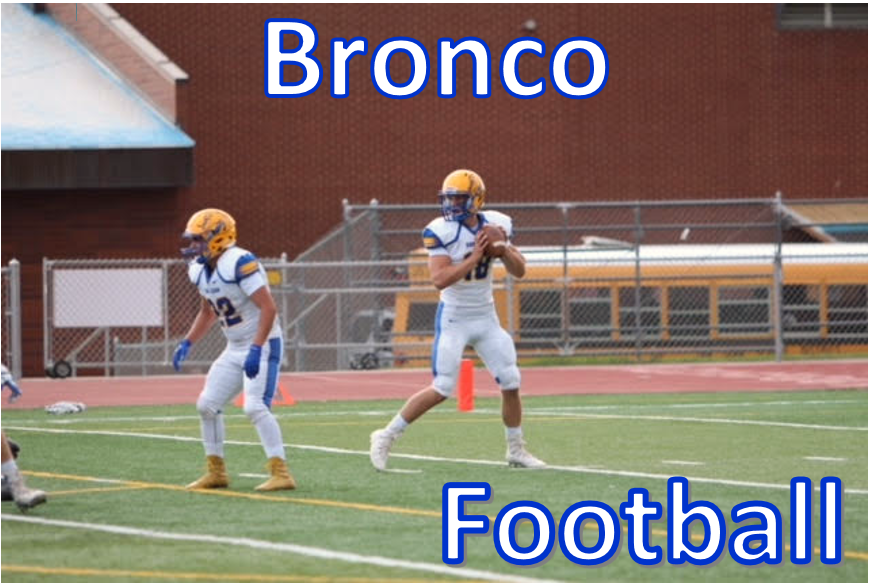 San Juan VS. South Summit
Our San Juan High football team made a 6-hour drive to South Summit High School for a non-region football game on Friday, August 17. The first quarter started off with a few fumbles that lead South Summit to a touchdown or two. They ended the first quarter 21-0, South Summit winning.
In the second quarter, Corbin Palmer, our quarterback threw a 77-yard pass to wide receiver Shaw Neilson, for a bronco touchdown. The score at the end of the second quarter was 42-6. Broncos had a rough start after half time as they entered the 3rd quarter of the game. Kian Conway had a bad hit and was sent to the hospital, going with him to the hospital his dad and our defensive coach, Kol Conway. Coaching the defense for the rest of the game was Bobby Bowring. We held South Summit to only two touchdowns that quarter.
Our defensive game got better in the 4th quarter. Ryan Imlay had a great touchdown, that brought us to our second score of the game. We did not win that game or come close for that matter, but it was a good way to start out the bronco football season. The team unity and good attitudes throughout the whole game made it better for the broncos to keep giving it their all no matter the score.

San Juan VS. Monticello
San Juan Broncos played the Monticello Buckaroos on Friday, August 24th. In the first quarter Kian Conway started us off with a 5-yard run, and a kick by Levi Ward. Further into the first quarter, a 35-yard pass by Corbin Palmer to Porter Ivins for a touchdown. Following that was a 40-yard pass by Corbin Palmer to Shaw Nielson for another Bronco touchdown. The final score for the first quarter was 19-0, our Broncos in the lead.
Starting the second quarter was a 30-yard pick-6 interception by Carlos Redd and a kick by Levi Ward. Scoring the second touchdown of the second quarter was Kian Conway, catching a 60-yard pass, thrown by Corbin Palmer. Another 35-yard pass by Corbin Palmer to Porter Ivins, leading the Broncos to another touchdown.  Going into halftime, broncos 21-Buckaroos 0.
The only touchdown of the third quarter was by Isaiah Hannigan, with a 3-yard run. The Broncos had a slow fourth quarter, no scores, but the Buckaroos in defense. Our San Juan Broncos had a good game last weekend against the Monticello Buckaroos, with a final score of 47-0. Only good things coming from the Bronco football team this season.

San Juan Bronco football didn’t have the best game against Bayfield on Friday August 31st, but we fought hard. Corbin Palmer had 92 yards rushing down the field, following him was Porter Ivins with 4 complete passes and all together 43 yards. Shaw Nielson with 2 complete passes and 41 total yards. Also receiving, Carlos Redd with 1 complete pass and 8 total yards.
Isaiah Hannigan leading our tackles this Friday with 19 tackles and 1 quarterback sack, following him Porter Ivins with 11 total tackles. Ryan Imlay with 10 tackles and 2 quarterback sacks, Tanner Black and Randall Flavel with 1 quarterback sack each.
Our defence did good this Friday but no quite good enough to hold Bayfields offence. Good job to our San Juan Broncos for giving all they had throughout the whole game and holding Bayfield to only 27 points. Ending the game 27-0, our broncos go into the next week with their heads held high ready to beat Delta.

San Juan Vs. Delta
San Juan Broncos had a good win against Delta on Friday, September 7th. Corbin Palmer started the game early with a 2-yard touchdown run, and a kick by Levi Ward. Shortly after the second quarter started, Elijah Lee had an amazing interception with a 70-yard touchdown return. Corbin Palmer had a 65-yard pass to receiver Shaw Nielson for another Bronco touchdown. Heading into halftime, Broncos 13- Delta 0.
Broncos had a slow 3rd quarter, no scores but holding Delta to only 2 touchdowns. Going into the 4th quarter Corbin Palmer threw a 35-yard pass to Carlos Redd that lead the Broncos to another touchdown. Minutes left in the 4th quarter, Ryan Imlay, had a 40-yard fumble recovery touchdown, following with a kick by Levi Ward. Final score of the Bronco Vs. Delta game was 34-16. Good game Broncos!

San Juan Vs. Beaver
San Juan Broncos had an amazing game on Friday, September 14th against Beaver High School. Going into this game Beaver was favored to win by a lot. Beaver in the second seat for our region and Broncos in last from the rough season we had last year. Broncos started the first quarter holding Beaver to only one touchdown, no score for the Broncos.
Corbin Palmer had a 1-yard touchdown run late in the second quarter that made the score 6-7, Broncos down by 1. Defense had a strong second quarter, holding Beaver to zero touchdowns. Right after halftime Isaiah Hannigan had a 30-yard touchdown run which gave the Broncos the lead for a short time. Beaver having one touchdowns in the 3rd quarter. Close score for that quarter, Broncos 8- Beaver 12.
The whole 4th quarter was a nail biter, back and forth plays and the defence doing all they can to hold the Beaver offence. Porter Ivins caught a 2-yard pass thrown by Corbin Palmer for a Bronco touchdown. With just seconds left in the 4th quarter the Broncos needed only 1 touchdown to win the game. 5 seconds on the clock the crowd is on their feet cheering on the Broncos, Corbin Palmer throws a pass to Porter Ivins, the buzzer goes off and Porter Ivins had an amazing catch barely in the end zone which gave the Broncos the touchdown they needed to win the game. An amazing, nail biting game that the Broncos won. Good job Broncos, you’ve made us all proud.

San Juan Vs. South sevier
San Juan Broncos played the South Sevier Rams on Friday, September 28th. Starting the game off for the Broncos was Isaiah Hannigan with a 20-yard run touchdown. Isaiah had an amazing running game against South Sevier with a total of 130 rushing-yards, leading the broncos in yards this game. Going into the second quarter the Broncos and the Rams tied 7-7. Late in the second quarter Corbin Palmer had a 1-yard run into the endzone for the Broncos second touchdown of the game.
South Sevier had a good defense that held our Broncos to slow start in the 3rd quarter. Kian Conway had an amazing 80-yard kick return late in the 3rd quarter, giving the broncos the touchdown they needed to win the game. Both the Broncos and the Rams had a slow 4th quarter no scores for either team. The defensive game was matched up pretty equally between these teams. Broncos with another win, defending their spot as #1 in the region.

San Juan Vs. North Sevier
As I was watching both football teams warm up on friday I honestly did not think that our San Juan Broncos would win. The first few plays in the game North Seviers defence was stopping our Broncos pretty hard. The Broncos made the first touchdown of the game, Corbin Palmer threw a 12-yard pass to Ryan Imlay for our first touchdown.
It was a slow 2nd quarter for both teams, both defences holding each others team to zero scores for that quarter. Heading into halftime broncos-6 North Sevier-0. Early in the 3rd quarter Corbin Palmer had a 90-yard pass to Porter Ivins. Later in the 3rd quarter Carlos Redd had a 2-yard run, giving the Broncos another touchdown. Bronco defence holding North Sevier to yet another no scoring quarter.
Isaiah Hannigan had the first touchdown of the 4th quarter for the Broncos, a 3-yard run right into the endzone for another Bronco touchdown. Kody Christensen gave North Sevier their first and only touchdown of the game. Late in the quarter Landon Pemberton had a 30-yard run giving the Broncos a huge lead in the game. Final score of the game Broncos-31 North sevier-7. I was wrong about this game, our Broncos played good and beat the North Sevier Wolves.

San Juan Vs. Grand
San Juan Broncos went into this game undefeated and ready to beat moab, unfortunately that was not what happened. It was a very slow first quarter for both teams. Dante Wells the moab kicker made the first score of the game with a field goal. Shortly after our Broncos made their first score of the game. Isaiah Hannigan had a 2-yard run for the touchdown. Going into halftime Broncos-8 Grand-3. The Broncos had a slow 3rd and 4th quarter but they fought hard. Good job Broncos.

San Juan Vs. Millard
The Broncos didn’t end the season the way they may have wanted to, but they didn’t go down easy. Our Broncos went into this season ranked last in the region and came back on top. Millard got the best of us in the first quarter. Corbin Palmer ran the ball in for the first Bronco touchdown of the game. Going into halftime Broncos-7 Millard-10. The broncos fought hard throughout the whole game, unfortunately did not win. The Broncos made us all proud this season. We Love Our Broncos.